"Tangent Labs was a logical choice to send equipment to be calibrated when our Lab was faced with a large amount of equipment to have calibrated.  Our Lab had used Tangent Labs before and were always pleased with their service and caliber of work. It was a definite plus that they would pickup our equipment because shipping delicate equipment is always a concern.  Their personnel are always courteous and prompt.  Their turnaround time is fantastic and our equipment is always handled with care.  They are able to accommodate priorities when necessary.  Our Lab will continue to send equipment to Tangent Labs because they have earned the trust through the work that they perform and their customer service.  There would be no hesitation on recommending Tangent Labs to anyone." 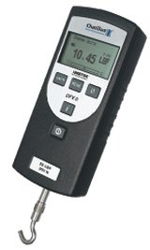 The CHATILLON DFX II Series is an economical digital force gauge ideal for applications where users are interested in basic peak force measurement.

The DFX II is available in four capacities (10 lbf, 50 lbf, 100 lbf, 200 lbf) and features an integral load cell with a measurement accuracy of better than 0.3% FS. The DFX II Series operates using a rechargeable NiMH battery pack and can also operate using the supplied universal charger. The battery eliminator is supplied with a US, UK and EURO style plug. Under battery operation, the DFX II Series will operate for over 70-100 hours of continuous use.

A large, easy-to-read, high resolution dot matrix LCD display supports a variety of standard gauge functions including normal and peak readings. Loads are displayed in ozf, gf, lbf, kgf and N units. The display language may be set up to indicate in English, Spanish, French, German, Portuguese and Chinese.